Throughout 2020, numerous mega projects of green hydrogen plants have been unveiled, an attractive fuel within the field of clean and sustainable energies, which allows generating electricity, and therefore facing the challenges of climate change and of the decarbonization of the economy. Hydrogen is a chemical component present in materials and compounds, which can almost never be found alone and requires procedures to achieve its extraction. (E&M Combustion designs and manufactures burners and combustion systems that operate with hydrogen as fuel and mixed burners to operate with a mixture of hydrogen and other fuels).

Gray hydrogen can be obtained from fossil fuels, hydrocarbons, which contain carbon and hydrogen. In this way, hydrogen is separated to be used as an energy source. To obtain green hydrogen, from clean and renewable sources, you can use water, algae, graphite or biogas. Green hydrogen can be produced by electrolysis, a reaction in water that separates its basic components through the passage of an electric current. 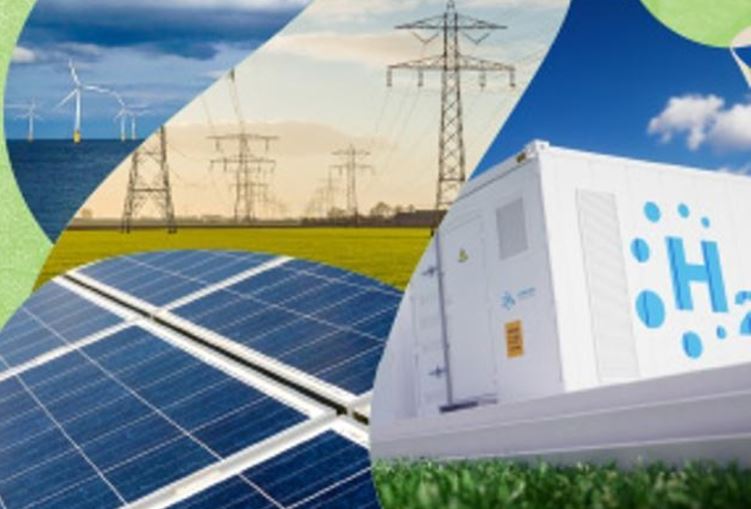 On March 10, 2020, the European Union formalized its so-called “Alliance for Clean Hydrogen” in which it was committed to working to identify technological needs and investment opportunities, as well as the elimination of barriers in the use of hydrogen. The initiative proposes bringing together companies and public and private organizations around it.

According to the EU, “hydrogen will play a major role in achieving a clean and prosperous economy. In the recovery from the economic recession caused by the COVID-19 virus, investments in building a hydrogen economy can contribute to a clean energy system and can fundamentally represent the emergence of a new innovative manufacturing industry, creating new green jobs and the growth of the economy ”.

The first plant producing “green hydrogen” arrived in Spain in 2018. Vitale will thus become the first Spanish plant for the sustainable production of hydrogen with the production of renewable energy in a small town in Ciudad Real. The plant, called Vitale, has been designed to produce hydrogen to power vehicles equipped with fuel cells. The hydrogen and oxygen that it will generate from electrolyzed water will be extremely pure (99.999%) and will benefit from the abundant renewable energy, of solar and wind origin, that exists in the area.

The most remarkable thing about this new hydrogen generating facility is that it promotes a completely renewable energy cycle, from the generation of energy from “green” electricity to its use, which will be used for fuel cell vehicles (FCEV ) that convert hydrogen into water and electricity. According to its promoters, Vitale will benefit from its strategic location to be able to supply hydrogen to 40% of the Spanish automobile fleet. 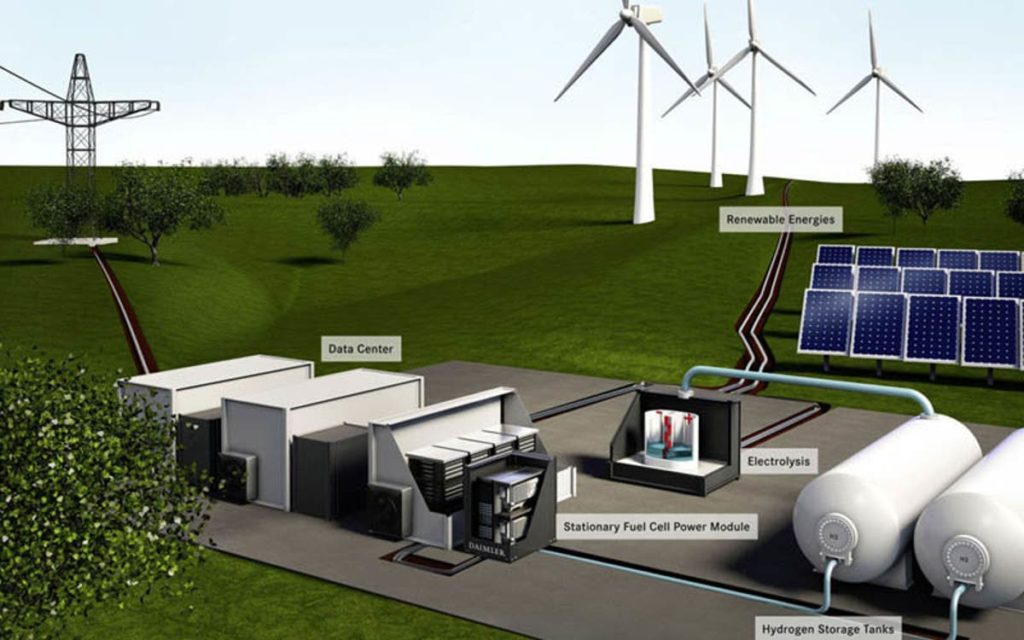 Three companies are promoting a project in which hydrogen is obtained from excess wind energy. The promoters say it will be the largest electrolyser plant in the world. Behind this green hydrogen factory are the offshore engineering firm DEME, the Belgian finance company PMW and the authorities of the port of Ostend. His project speaks of “a 50MW pilot that will become the world’s largest electrolyzer plant, scheduled for construction in 2025.”

«”While the generation of green hydrogen by electrolysis is nothing new, the Hyport Oostende plant is the first designed to run solely on clean energy,” explain those responsible.

A consortium consisting of Toshiba, Tohoku Electric Power and Japan’s New Industrial Technology and Energy Development Organization (NEDO) have inaugurated what is claimed to be the world’s largest facility for the production of green hydrogen from solar power in Fukushima, Japan, near the site of the 2011 nuclear disaster.

The Fukushima Hydrogen Energy Research Field (FH2R) uses a 20MW solar array, backed by renewable energy from the grid, to run a 10MW electrolyzer in Namie Town in Fukushima Prefecture. Toshiba said in a statement that the project is the largest electrolyzer to produce hydrogen from clean energy sources. The FH2R system can produce up to 1,200 Nm3 of hydrogen per hour. 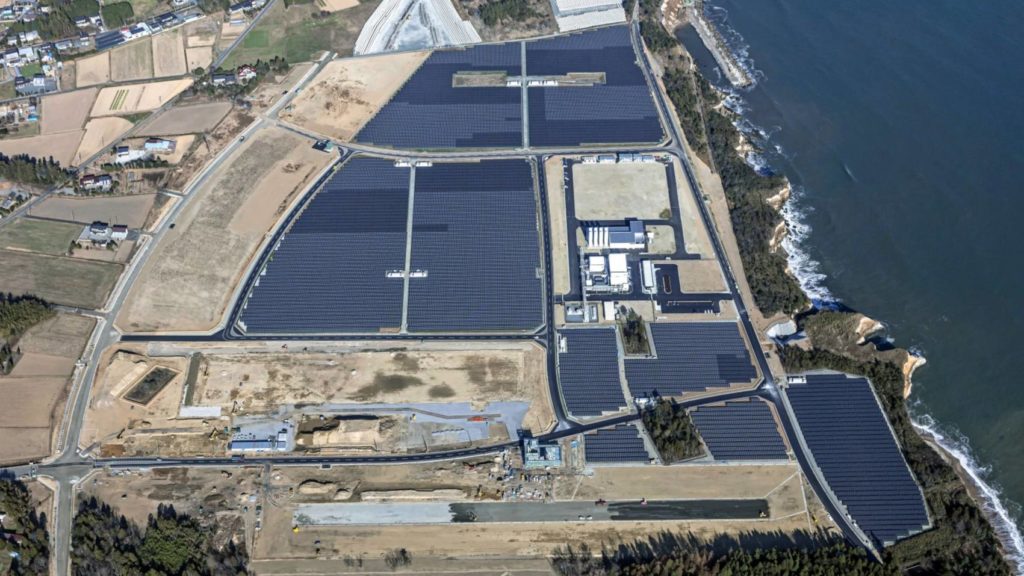 The Chinese mining group Baofeng Energy has announced that it has started construction of the world’s largest solar-powered hydrogen plant in China’s Ningxia province. The project will use a 200 MW solar power plant located in the northwest region of Ningxia to produce hydrogen through electrolysis.

The energy company Enagás has launched a project at its regasification plant in Cartagena through which it will be able to obtain 100% clean green hydrogen from solar energy, in an electrolysis process. The objective is to inject it into the internal network of the facility, mixed with natural gas, which will maximize the energy efficiency of the plant, as well as reduce its carbon footprint. This initiative represents the first real hydrogen injection experience in a regasification plant at the European level, with the support of a small-scale electrical storage system.

For Enagás, renewable gases can play a fundamental role in achieving carbon neutrality by 2050, the objective of the European Green Deal promoted by the EU. For this reason, within its strategy for the next six years, Enagás has set to dedicate around 300 million euros to the development of hydrogen and biogas-biomethane projects that promote the decarbonization process of the economy.

In this process, the existing gas infrastructures in Spain can occupy a prominent position, since they are prepared to store and transport these new renewable gases, without the need for additional relevant investments in networks.

The Spanish multinational Repsol has presented two industrial decarbonisation projects that it will develop in the port of Bilbao and its surroundings and that will involve an initial investment of approximately 80 million euros. The construction of these two plants, one of green hydrogen and the other of gas from urban waste, are part of the strategy in the energy transition, with the aim of being a company with zero net emissions by 2050.

The green hydrogen project will entail an initial investment of 60 million euros. It consists of the construction of one of the largest plants for the production of synthetic fuels with zero net emissions in the world from green hydrogen, that is, generated with renewable energy. “The main characteristic of these novel fuels is that they are produced with water and CO2 as the only raw materials” and can be used in combustion engines such as those currently installed in cars, airplanes, trucks and in other applications.

The Italian group Enel plans to commit to green hydrogen, to achieve this it will start up a new green hydrogen unit in 2021 with the aim of becoming a zero-emissions company in 2050. Enel plans to take its new business wherever it has business renewable. These markets are the United States, Chile and Spain, where the group owns power company Endesa, as confirmed to Reuters by the director of its Global Power Generation division, Antonio Cammisecra.

Spain, through Endesa, is called upon to lead this new business unit in Europe. It is in Spain where the group has large renewable assets and plans to build thousands of megawatts in the coming years. Enel will install electrolysers in its photovoltaic and wind farms, devices that decompose water into hydrogen and oxygen through an electric current, to produce hydrogen that will be used for energy storage or sold to industrial customers to help them in their decarbonization processes.

19/07/2020 Thyssenkrupp and Air Products: Mega projects to promote ‘green’ hydrogen around the world

Air Products, a world leader in the development of industrial gas megaprojects and of which Metal Carbides is a part, and thyssenkrupp Uhde Chlorine Engineers, a world leader in technologies and integral solutions for electrolyzers, have announced a strategic cooperation agreement by which both companies will collaborate in key regions with the aim of developing projects that supply ‘green’ hydrogen around the world.

Thyssenkrupp  will provide its technology and provide technical and engineering services, as well as specific equipment for the water electrolysis plants that Air Products will exclusively build and operate. This collaboration leverages thyssenkrupp technology that supports Air Products’ development of green hydrogen as an energy carrier for sustainable transportation, the chemical sector and power generation.

The Lisbon Government and EDP have teamed up to build a hydrogen mega-plant in Sines that would consume solar energy with an investment of 2,850 million euros.

Green hydrogen, intensive in electricity to obtain it, differs from the traditional one in that it is produced with sustainable energies, such as wind or photovoltaic, and has great potential for mobility because it can be stored and used in fuel cells for power of company fleets and private vehicles. In fact, the French group PSA does not rule out adding this option to its catalog, especially for commercial vehicles (vans).

The complex will occupy some 4,000 hectares of land. Lisbon’s idea – which wants to accelerate the energy transition – is to start operating the first electrolyzers in the 2022-2023 biennium. 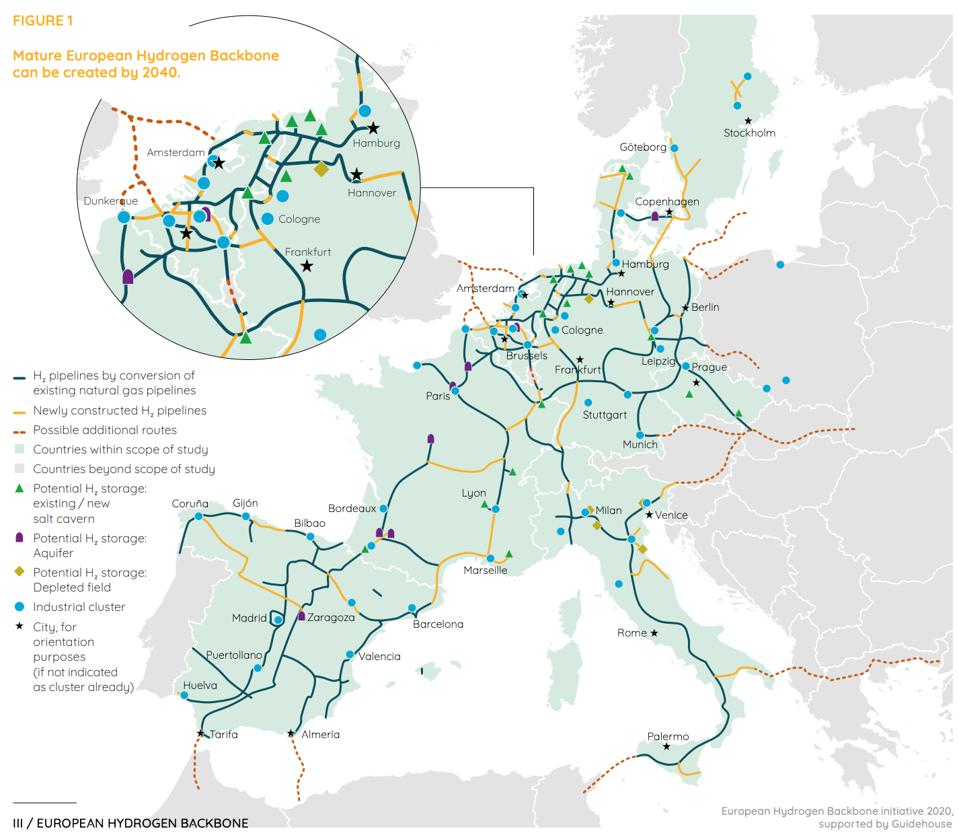 A group of eleven European gas infrastructure companies from nine EU member states, among which is the Spanish Enagás, has presented the ‘Red Troncal de Hidrogen en Europa’ (European Hydrogen Backbone plan) plan for the development of a specific hydrogen transport infrastructure. As this report points out, existing gas infrastructures can be adapted to transport hydrogen at an affordable cost.

The plan has been developed by Enagás, Energinet, Fluxys Belgium, Gasunie, GRTgaz, NET4GAS, OGE, ONTRAS, Snam, Swedegas and Teréga, with the support of the consulting firm Guidehouse. These companies foresee that, starting in the mid-2020s, a backbone network of gas pipelines will gradually be developed, reaching 6,800 km in length by 2030 and connecting the so-called ‘hydrogen valleys’ (supply and demand centers) .

By 2040, a 23,000 km hydrogen network is expected to be in operation, of which 75% will be made up of adapted natural gas pipelines, and the remaining 25% by sections of new gas pipelines. Ultimately, two parallel gas transportation networks will be active: one for hydrogen transportation and the other for natural gas and biomethane. Taking into account hydrogen imports, this backbone can be used to efficiently transport hydrogen on a large scale and over long distances.

Iberdrola and Fertiberia join forces in their commitment to the sustainability of the industrial sector. The companies have signed an agreement, which will activate an investment of 150 million euros, for the construction of the largest green hydrogen plant for industrial use in Europe, which the Spanish companies will promote in Puertollano (Ciudad Reak) and which will be operational in 2021 .

Iberdrola will be responsible for the production of green hydrogen from 100% renewable sources. The solution will consist of a 100 MW photovoltaic solar plant, a lithium-ion battery system with a storage capacity of 20 MWh and one of the largest hydrogen production systems through electrolysis in the world (20 MW). The green hydrogen produced will be used in Fertiberia’s ammonia factory in Puertollano. This plant is already one of the most efficient in the European Union, with a production capacity of over 200,000 t / year. Fertiberia will update and modify the plant to be able to use the production of green hydrogen and, in this way, manufacture green fertilizers.

Contribution of E&M Combustion to the industrial hydrogen value chain

E&M Combustion engineering specialized in the design and manufacture of Combustion Technologies for industrial processes, develops burners and combustion systems that operate with hydrogen as fuel and mixed burners to operate with hydrogen and another fuel mixture. Hydrogen added to other types of fuel helps to significantly optimize standard fuel combustion systems, thereby improving energy efficiency, while saving fuel and removing air pollutants and solid waste.

JBD burners are the most widely used duoblock equipment in hydrogen operation. They are prepared to overcome high overpressures in the combustion chamber. They are manufactured in the 1,000 to 85,000 KW range and are used with all types of liquid and gaseous fuels.

Among the main characteristics of the JBD combustion equipment stand out its innovation in design, as well as the low NOx emissions and the double air register that they use. The standard range includes burners for traditional fuels such as diesel, natural gas and G.L.P., fuel oil and mixed burners that use gas-diesel and gas-fuel oil or hydrogen. E&M Combustion also makes special combustion equipment for the burning of biogas, recycled oils and other types of alternative fuels.