Under the Zukunftspaket stimulus package, Germany’s National Hydrogen Strategy includes a €7 billion package for green hydrogen technology development and an additional €2 billion to boost international partnerships in the hydrogen market. Added to these figures is significant support at the regional level, with many of its regions developing roadmaps and favorable legislation in this field. Within this framework, there are many programs for financing green hydrogen projects in the country, in addition to a large volume of investment in the private sector.

Germany and its regions are committed to green hydrogen despite the fact that hydrogen demand in Germany is currently around 57 TWh per year (mainly for the chemical and petrochemical industry), a relatively low figure, but which is expected to increase substantially in the coming years, until reaching 90-110 TWh in 2030. The government’s objectives include 10 GW of installed capacity in 2030, for which it is estimated that the country will have to import around 60% of the hydrogen of its demand and for this reason, it is doing great efforts in developing international alliances. 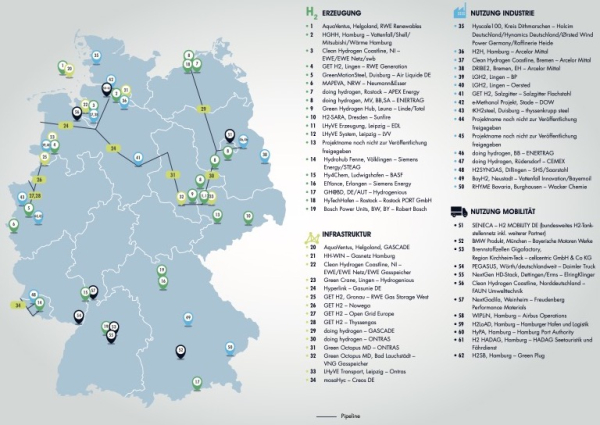 Germany has great potential in its value chain to become one of the leaders in the hydrogen sector. In addition to a large number of companies that are already participating in projects in different fields, there is a broad ecosystem of support for the deployment of these technologies.

These projects are being driven from different public and private spheres, and cover the entire spectrum of the sector, from technologies for electrolysers, the generation of various types of renewable energy for the production of hydrogen or the decarbonization of industries such as the steel, petrochemical or cement industries. Projects for the deployment of hydrogen transport infrastructure are equally relevant, as well as mobility projects that cover practically all modalities, including automotive, maritime, rail or air. Most of these projects are being led by consortiums made up of large German companies and are mostly oriented towards research and demonstration.

In the following link you can find the funded H2 Projects 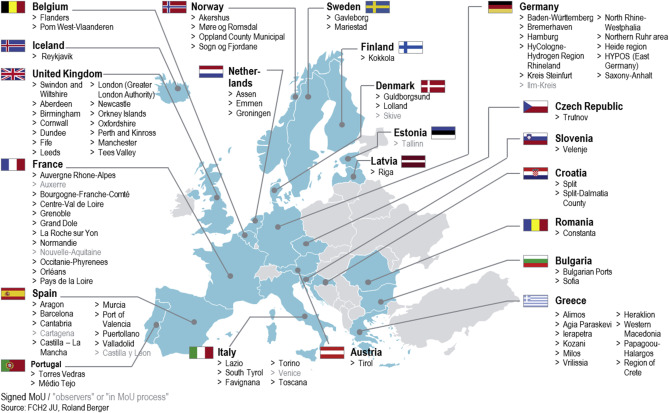 Most of the scenarios contemplated conclude that hydrogen and derivative fuels will account for between 10% and 23% of final energy consumption in the EU in 2050, and the Joint Research Center considers that approximately 2,000 TWh of hydrogen will be needed in 2050.

Specifically in Germany, the demand for hydrogen currently amounts to around 57 TWh per year, although only 7% of this hydrogen is green. The German Ministry of Economy and Climate Action calculates that the demand will rise to 90-110 TWh in 2030, and it is expected that in 2050 it will exceed 600 TWh, mainly driven by the growth of industrial demand until the year 2030, while after the year 2050, transport is expected to be the sector with the highest demand.

In any case, Germany will not have the capacity to supply its consumption and will be forced to import around 60% of the hydrogen in its demand. With this objective, Germany has already begun to establish agreements, from memorandums of understanding, to energy collaborations and investments for the supply with countries outside the EU, including Saudi Arabia, Australia, Chile, Namibia, Canada, Ukraine, Morocco, Abu Dabi, South Africa or Georgia.

How Germany and its regions bet on green hydrogen

Germany has an ambitious decarbonization plan with the goal of reducing emissions by 65% ​​by 2030 and 88% by 2040 compared to 1990. The country is in the process of dismantling nuclear power plants, for so the greater weight of electricity production will depend on renewable energies.

The German National Hydrogen Strategy (NWS) shat emerged in 2020 includes the goal of 5 GW of electrolysis in 2030 and the installation of another 5 GW between 2035 and 2040, with an estimated annual production of 14 TWh for every 5 GW of installed capacity. Its objectives include:

In addition to the national strategy, several of Germany’s 16 regional governments have drawn up hydrogen roadmap strategies. Among these are BadenWürttemberg, Bavaria or North Rhine-Westphalia. Furthermore, the northern coastal regions of (Bremen, Hamburg, Mecklenburg-Vorpommern, Niedersachsen and SchleswigHolstein) have created the HY-5 green hydrogen alliance with the aim of making northern Germany the future leading green hydrogen region. in Europe and complete the green hydrogen value chain.

The Federal Ministry for Economic Affairs and Climate Protection (BMWK) approved in December 2021, an allocation of 900 million euros for the financing instrument called H2Global. It is a public-private platform designed to support investments for the production of renewable hydrogen in countries outside the EU, from which the hydrogen will subsequently be imported into the EU, through a double public auction mechanism. Under this system, hydrogen will be purchased outside the EU at the lowest price through a 10-year supply contract. Subsequently, the purchased hydrogen will be sold in another short-term auction to European and German companies with the aim of decarbonizing their processes.

This platform will be in charge of channeling the aid designed to offset the differential costs between the purchase and sale of hydrogen. The purchase and sale operations of PtX products will be managed through the intermediary HINT.CO (Hydrogen Intermediary Company), a subsidiary of the H2Global2 Foundation created by private companies. In the event that HINT.CO must assume losses, these will be covered by the German Government for the first 10 years, through CfDs. 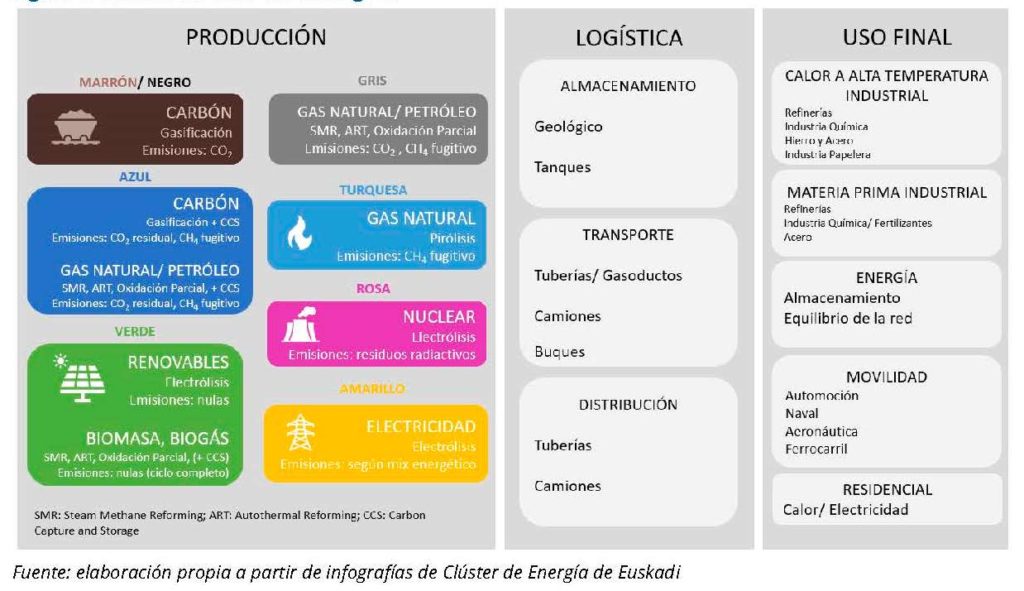 The hydrogen value chain is articulated around the three pillars of production, logistics and end uses. In terms of end uses, the predominant sectors in which the introduction of hydrogen currently seems most viable include the chemical and petrochemical industries, traditional users of hydrogen. However, this sustainable fuel is called upon to provide great support in a wide variety of sectors to Generate heat at high industrial temperatures (in refineries, the chemical industry, iron and steel or the paper industry), as an industrial Raw Material (in refineries, the chemical industry , fertilizers, steel), in Energy for storage, in Mobility and in Residential (to generate heat and electricity).

As an engineering company for innovative combustion technologies and due to its experience in this area, E&M Combustión provides advice, design, manufacture and commissioning of Hydrogen Burners and Hydrogen Combustion Systems in power generation plants and in industrial processes. Precisely because of its relevant role in the energy transition, E&M Combustión’s hydrogen burners are already operating in chemical and petrochemical plants, allowing greater boiler efficiency and reduced emissions.