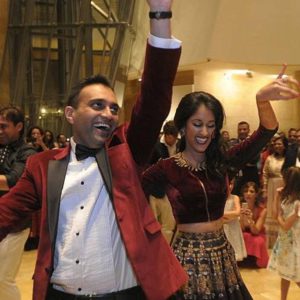 We talked to Ashish Halageri, CEO of E & M Combustion India on professional, social and cultural issues. Among other things, Ashish tells us how is a Great Indian Wedding.–  How do you manage to adjust to the time difference between India and Spain?

Flexible working hours are the need of the hour. Thanks to my work experience with European companies I am accustomed to this difference.

– Are there differences in the manner of working in India and foreign companies?

Yes, the demographics are different with highly established socio-economic practices. One such difference that can be easily noted is the hierarchical system at the workplace. People, arguably, take a lot of pride in their position and often treat others based on their title. In Western Countries you see a much flatter organization.

– What is the overall visión of Indian professionals who work in foreign companies?

Westerners were the pioneers to define systems and processes to generate efficiencies in the working methodology while maintaining striking balance between work and life. Many foreign companies including some Indian MNC’s as well implement such systems and processes within their cross-functional levels.

Indian professionals who work with such companies think about expertising such processes which adds value to the quality of work, provides them with knowledge and skill sets for the betterment of life.

– What Indian people know about Spain and Spanish industry ?

The Spanish language is the second most spoken in the World. I have heard a lot about Spain as a Tourist desitination, Centre for Architecture, Flamenco Music & Arts, Bull – fights, Gastronomy. If you are sports lover you cannot forget to mention about the clay court Rafael Nadal, speed king Fernando Alonso, the striker Fernando Torres. Last but not the least the Spanish ‘Fiestas’.

Spain is the 12th largest investor in India with $1.8 billion in FDI, mostly in infrastructure (Isolux Corsan, Grupo San Jose), renewable energy (Gamesa), auto components (Gestamp), water desalination (Abengoa) and single brand retail (Inditex – Zara/Mango) A total of around 200 Spanish companies have subsidiaries, joint ventures, projects or liaison offices and purchase offices in India.  In a recent success a Talgo S.A  a Madrid based company has successful to convenience Indian government in high speed trains project. The company got its breakthrough this year when it got the go-ahead to test its coaches on few routes in India to prove its trains can slash travel times for the 13 million people who use the state-owned Indian Railways every day. Talgo claims its coaches can cut travel time by up to 30%. Once the test-run is successful, it will be a major breakthrough.

– What books or magazines read to learn more about India?

The must read books:

– Is Bollywood one of the main cultural representatives of modern India?

Bollywood is one of the cultural representatives of modern India. Regional Films from South of India, Bengal etc are not far behind. In fact, Indian Cinema on the whole has contributed it’s part in development of India. In the words of the economist and Bollywood biographer Lord Meghnad Desai, “Cinema actually has been the most vibrant medium for telling India its own story, the story of its struggle for independence, its constant struggle to achieve national integration and to emerge as a global presence.”

– It has recently taken place in Bilbao a spectacular Indian wedding that has focused the public attention. Tell us how is a “Great Indian Wedding”

It is a celebration of unification of two bodies and one soul for eternity. An average Indian wedding lasts for 3 days. In North of India it lasts for 5 days and 2 days in South of India. Mine lasted for 2 days and trust me it was very exhaustive.

One of the first things that might surprise Western guests is the baraat, or groom’s procession. For this, the groom arrives to the ceremony on a decorated white horse. Guests dance around him to the beat of the dhol, an Indian drum. After that, the bride and her family greet the groom, and the couple exchanges floral garlands to wear around their necks to symbolize their acceptance of each other.

For the ceremony, the priest, groom, bride, and bride’s parents sit beneath a mandap, a canopy similar to a Jewish huppah. The ceremony starts off with the kanya daan, in which the bride’s parents give away the bride. Then the couple joins hands and circle around a small, enclosed fire (the agni) in a ritual called the mangal phera.

Then the couple will take the saptapadi, or seven steps, as they vow to support each other and live happily together. Finally, the groom will apply a red powder to the center of the bride’s forehead and tie a black beaded necklace around her neck, symbolizing that she’s now a married woman.

On all the days the invited guests are royally treated by the hosts to one’s capacity. It’s a hell of a “FIESTA” time.

Ashish Halageri: “Companies are attracted to India, but fail to offer solutions that the market needs”