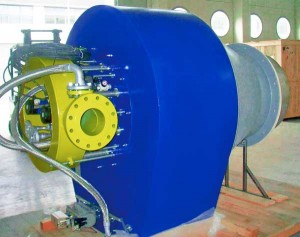 Revamping of Repsol burners. E&M Combustión has successfully undertaken the revamping at Repsol Tarragona of its JBD 50,000 GFO Burners  installed on the 200 MW boiler in the Olefins plant.
The challenge this project has posed has been the short timeframe available for the commissioning and the difficulties involved in assembling the equipment. In fact, the entire commissioning process was completed in a week.

E&M Combustión was awarded this contract at Repsol’s refinery in Tarragona (Spain) for the revamping of the radiant area of the Olefins boiler and the building of the new valve skids for this equipment.

The contract includes the manufacture and replacement of the six existing burners for new ones, whose thermal output is 37.5 MW each, operating with hot air up to a design temperature of 180 ºC. The burner models are JBD 50,000 GFO, which are mixed, fuel oil – fuel gas, with steam atomising, and include the new emission reduction systems developed by E&M Combustión.

Video of the tests performed with the burners: