At E&M Combustión we review the main green hydrogen projects in Latin America that have come to light in recent months. Green hydrogen initiatives have recently been announced in Argentina, Brazil, Chile, Colombia, Mexico, Peru and now also Uruguay.

Uruguay could already have its first export project for green hydrogen derivatives, according to BNA Americas. The German company Enertrag is studying the Tambor Green Hydrogen Hub project in the department of Tacurembó, in cooperation with the local energy consultancy SEC Engineering. The first phase contemplates 350 MW of installed wind and solar capacity to produce 15,000 T per year of green hydrogen, which could be converted into e-methanol. This could offset around 10% of the methanol produced conventionally from Russian crude at Germany’s largest refinery, which is an important input for the chemical industry. In addition, e-methanol can also be used as an energy carrier.

Uruguay could generate revenues of US$2.1 billion per year by 2040 from the sale and export of green hydrogen and derived products, as contemplated in the country’s roadmap. Domestic demand would come from maritime and heavy transport and fertilizers, while exports will mainly be geared towards demand for e-jet fuel, ammonia and e-methanol. The country hopes that export-oriented projects will accelerate from the year 2026, when it reaches a green hydrogen production of 1 or 2 GW in 3 medium-scale plants and another plant, at least, for export during the period 2026- 2030.

On November 1, 2021, the Australian mining company Fortescue announced that it will invest 8.4 billion dollars in the country until 2028 to develop a green hydrogen production project. The announcement was made within the framework of the COP26 climate summit that was held in Glasgow (United Kingdom), where the Argentine president, Alberto Fernández, met with the top managers of the Australian company.

The announced disbursements will go to the so-called Pampas Project, which Fortescue will develop in the town of Sierra Grande, Río Negro, where the company has already begun prospecting work with a view to producing green hydrogen on an industrial scale.

The basic lines for the energy transition in Argentina are outlined in “Guidelines for an energy transition plan to 2030”, approved by the National Energy Secretariat in Resolution 1036/2021. According to the report, there is no single decarbonization path. For this reason, the G20 adopted the concept of “transitions” (in the plural), an approach suggested by Argentina during 2018, which recognizes that “countries have different ways to achieve cleaner energy systems, while promoting sustainability, resilience and energy security.

On the other hand, in the first days of this month of March, the governor of Jujuy, Gerardo Morales, met in Paris with executives of the French Development Agency (AFD), in order to address various financing schemes to direct the execution of the green hydrogen generation project, the thermo-photovoltaic complex that is being developed jointly with INVAP and the 200 MW photovoltaic plant planned in El Pongo. 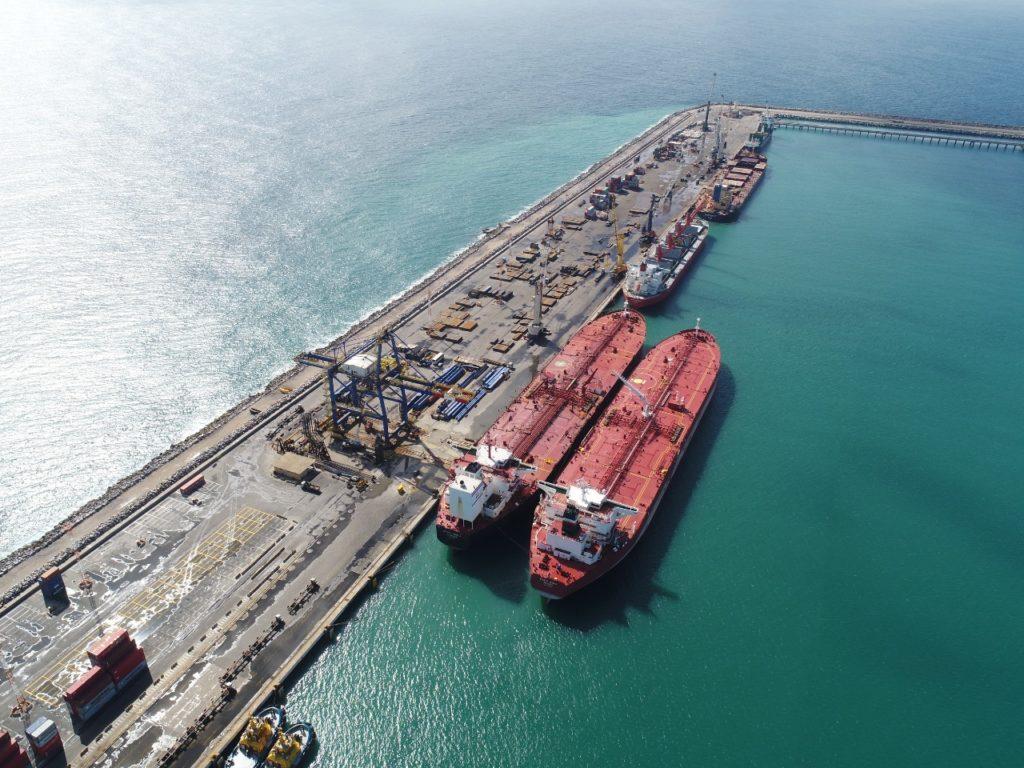 Brazil is mobilizing several green hydrogen projects in recent weeks. In the Brazilian state of Ceará alone, some twenty agreements already signed with the local government are projected, which will generate multi-million dollar investments, according to the BN Americas source. The most recent signed by this Brazilian state is the memorandum of understanding with H2 Green Power to install a green hydrogen production plant in the port of Pecém, according to the local government.

This memorandum refers to the development of a project linked to the green hydrogen production chain, which includes a possible participation in an ammonia storage center and services and which will be developed and implemented in the port and industrial complex.

On the same dates, Ceará signed another memorandum of understanding with Kroma, a firm that intends to install several photovoltaic solar parks in the interior of the state. The Arapuá and Frei Damião complexes will attract investments of 2.2 billion reais (US$430 million) and a total installed capacity of 690MW.

In addition to these projects, the state has signed memorandums of understanding with:

The list does not include a pilot announced by EDP Brasil in September 2021, which includes a 41.9 million reais green hydrogen plant that is due to come online in December. In this case, no memorandum of understanding was signed.

Other projects in Brazil

Other industrial and port complexes in Brazil are also betting on green hydrogen. Thus, the port of Suape, in Pernambuco, signed memoranda of understanding or is in negotiations with Neoenergia and Qair Brasil, while, in Rio de Janeiro, Fortescue Future Industries is in talks with Porto do Açu. In turn, in Rio Grande do Sul, White Martins signed a memorandum with the state for the production of green hydrogen, while Nexway (Comerc) and Casa dos Ventos are in advanced talks with northeastern states to start green hydrogen projects. Added to this list of projects was the signing of a memorandum by the Spanish company Elecnor on March 26 for the development of a potential green hydrogen project in Rio Grande do Sul. 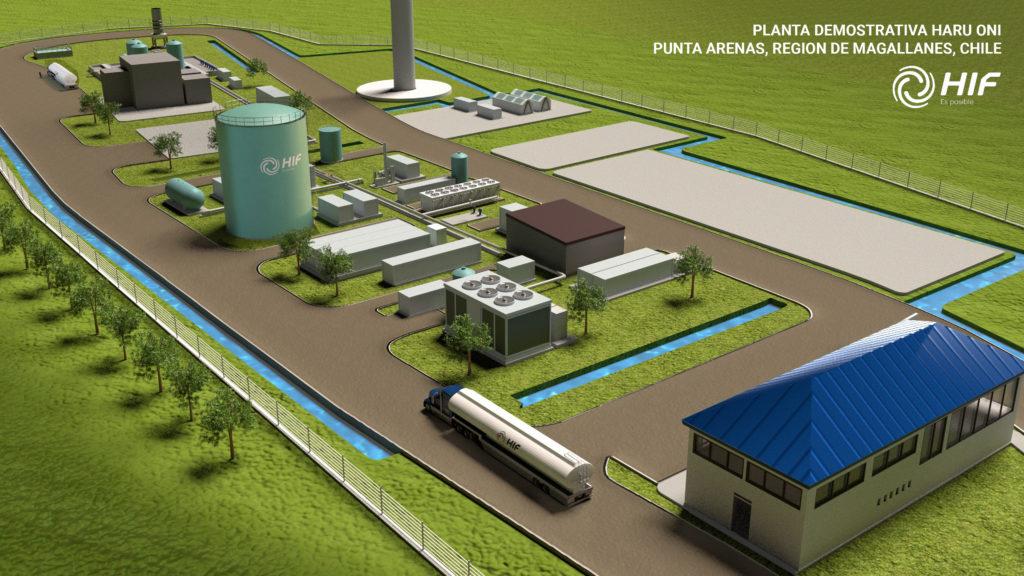 Among the countries with green hydrogen projects in Latin America, Chile seeks to position itself as a leader in green hydrogen production worldwide, with the announcement of a series of projects in the north and in the extreme south of the country promoted by Enel Green Power, Linde , Engie, Air Liquide, GNL Quintero, and CAP, which will attract investments of US$1,000 million.

With the goal of achieving carbon neutrality by 2050, Chile is making steady progress, positioning itself as a pioneer in renewable energy worldwide, thanks to natural advantages such as the highest solar radiation in the world and an excellent wind resource. And green hydrogen will be a key piece in this strategy. Precisely to accelerate the materialization of these initiatives, the Production Development Corporation (Corfo) selected six proposals in the first call to develop green hydrogen production plants in Chile. The facilities should go into operation in December 2025.

The selected proposals will attract investments of US$1,000 million and will produce 45,000 tons of green hydrogen per year, which will reduce more than 600,000 tons of CO2 per year. 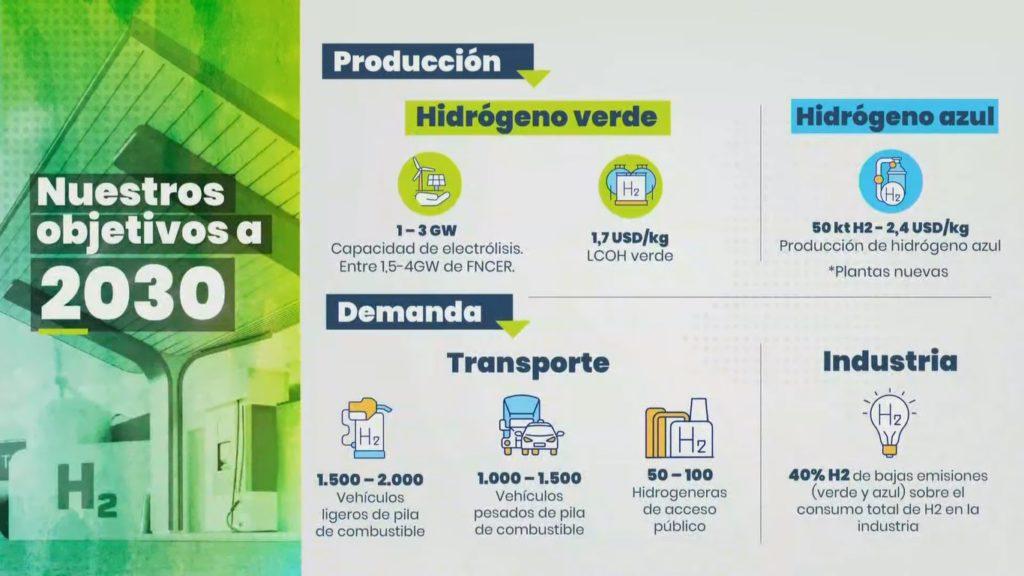 The Government will focus on four axes that range from creating an adequate regulatory framework to contributing to the creation of generation and demand. The goal is that in 2030 green hydrogen costs no more than 1.7 dollars per kilo. And in 2050 it will revolve around the dollar per kilo, with the goal that, in 2030, it can be produced in the North Caribbean, where wind and solar resources are concentrated. By mid-2022, at least three pilot projects focused on hydrogen could be underway, one linked to Ecopetrol’s fuel refining and two others in transports.

Specifically, the state oil company Ecopetrol will invest around 140 million dollars each year until 2040, which brings the total investment to around 2,500 million dollars, to produce zero and low-emission hydrogen. The company has already started a first green hydrogen pilot project at its refinery in the Caribbean city of Cartagena, as part of its strategy to diversify its energy sources. The hydrogen produced will be used for its own operations, in low-carbon products for sale in Colombia and abroad, as well as for other uses.

In addition, there are another 13 pilot projects under analysis in the country, which could be developed in the short term, linked to industrial uses, transportation, electricity generation, mixed uses: industry and transportation; and blending with natural gas.

The potential of Mexico as a producer

Mexico has a high potential to produce green hydrogen (H2V), that is, without CO2 emissions, at a very low cost and co-lead an industry that will be fully developed in the next 30 years, according to experts. However, until now the country has remained apart from global trends in terms of regeneration of the energy matrix and modernization of its electrical system.

At a press conference, Javier Salas Gordillo, advisor to the Support Program for the Energy Transition in Mexico of the Mexican-German Climate Change Alliance (GIZ Mexico), recently declared that although there is currently no production of green hydrogen in the country , the potential of photovoltaic and wind energy allows Mexico to have the possibility of producing this element at prices of 1.4 dollars per kilogram and costs of 1.2 dollars per kilogram could be reached in the areas with the greatest potential.

In Mexico, the federal government has not shown much interest in developing this clean energy alternative, despite the fact that the private initiative has proposed to design a strategy that detonates it, revealed to MILENIO Israel Hurtado, president of the Mexican Hydrogen Association ( AMH2). In the absence of this impulse from the authority, the AMH2 has got down to work and is designing “a roadmap to get the industry off the ground and identify possible barriers to entry, challenges and opportunities to develop green hydrogen ”. However, Hurtado warned that the momentum from the association may be insufficient.

In Mexico, Hurtado pointed out, there are three large green hydrogen projects under development that represent investments of 1.4 billion dollars: one is in Baja California, another in Guanajuato and the third is located in Durango. “Even Pemex and the Federal Electricity Commission (CFE) can become producers of green hydrogen and use it to decarbonize their operations,” he said.

H2 Peru, Peruvian Hydrogen Association, created a year ago to promote the development of green hydrogen in the country, also recently presented to the Congress Authorities and the National Executive a proposal for a Green hydrogen roadmap in the country, accompanied by the document called “Bases and Recommendations for the elaboration of the green hydrogen strategy in Peru”  where different components of the future national strategy are being analyzed: opportunities for Peru, application sectors in the country, export potential, implementation of a green hydrogen and promotion measures.

Daniel Cámac, president of H2 Peru, points out that “through its proposals, H2 Peru seeks to support the Peruvian State in this green hydrogen race, which serves to build the national strategy, develop the operational framework and encourage the appearance of pilots and projects, as well as promoting the deployment of the energy of the future in our country”.

It should be remembered that H2 Peru published in February 2022 a “Project Law for the promotion of Green Hydrogen”, which contains a regulatory proposal, with the aim of debating a regime for the promotion of green hydrogen. These documents were developed from a collaborative work that will last more than 7 months between the associates of H2 Peru and representatives of the academy and the private and public sectors that make up the green hydrogen ecosystem in Peru.

“The next steps to make this partnership project a reality would be to approve the bill and start the studies identified as key to implementing this roadmap, under the leadership of MINEM and with the collaboration of all the actors in the ecosystem,” he concluded. Daniel Camac. 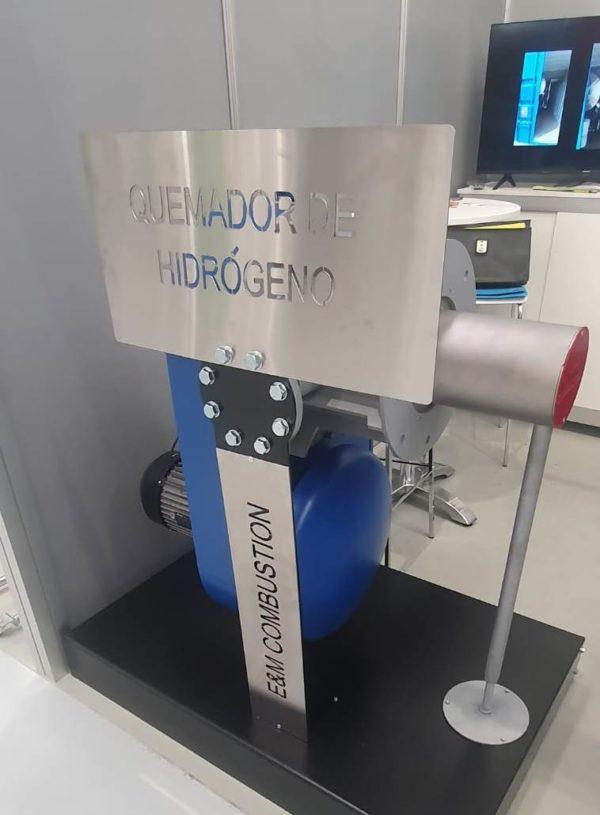 With the review of the recent green hydrogen projects in Latin America that several countries in that environment manage, the growing interest of governments, companies, scientists and investors in developing alternative energy sources to fossil fuels as an alternative to decarbonize the economy is highlighted. E&M Combustion, engineering dedicated to the development of innovative Combustion Technologies, presented the development of the prototype of a specific hydrogen burner for this fuel for the industrial sector within the framework of the Expobiomasa 2021 fair, held from September 21 to 23.

The objective of this hydrogen burner prototype is aimed at converting industrial and building thermal installations and boiler rooms into sustainable ones, allowing their decarbonization and the reduction of emissions. As one of the main protagonists of the energy transition, the burners that use hydrogen represent an evolution of traditional combustion systems and allow achieving greater energy efficiency with combustion that eliminates all CO2 emissions into the atmosphere. And with its use together with other fuels, such as natural gas (mixed or multi-fuel burners), it considerably reduces the emission of these greenhouse gases.